Helbertijn Krudop (b. 1984) studied art history at the University of Leiden, specialising in the applied arts and oriental influences in this field. After her graduation in Leiden she started on a minor, and subsequently a Master’s course, in ‘Conservation and restoration of cultural heritage’ at the University of Amsterdam, specialising in wood, furniture, and gilded objects. She completed her Master’s degree with a study on the construction of eighteenth-century rococo chests of drawers. Despite the obvious differences between appearance and execution, she still derives benefit from this background when studying Egyptian wooden constructions. Krudop completed her studies at the University of Amsterdam with a two-year post-initial phase, during which she worked on commissions for the Netherlands Cultural Heritage Agency (RCE), Artis Library (UvA Special Collections), and the Lutheran diaconate of Amsterdam, also working as an intern at Het Loo Palace and the Centre de Recherche et de Restauration des Musées de France (C2RMF) in the Louvre.

Restoration work at the museum

Since September 2014 Krudop has worked as a conservator at the Dutch National Museum of Antiquities, where she is responsible for organic materials (textiles, papyrus, leather, bone, wood etc.). Her own work is primarily with painted wood, with a special focus on the Egyptian collection. Overarching themes within her recent research and conservation projects include the restoration history of the museum’s Egyptian collection, old restoration materials, and the ethics of restoration over the years. Her other fields of special interest include neo-styles and the 19th-century reception of antiquity.

Each of these exhibitions involved major restoration and/or installation projects. 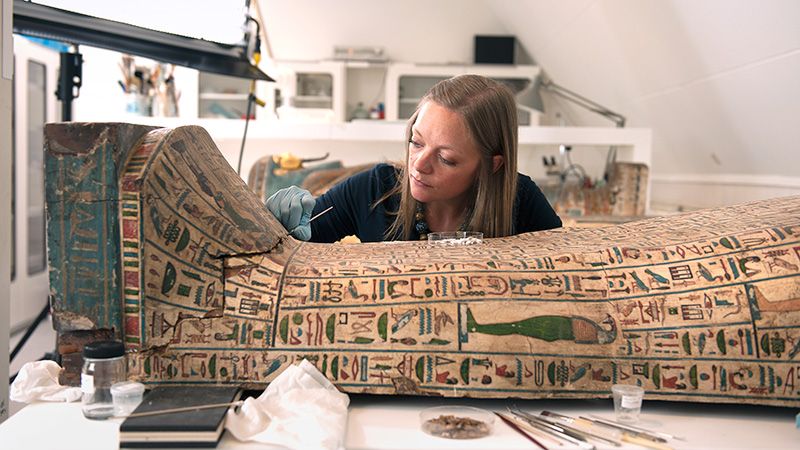