In 2023, the National Museum of Antiquities (RMO) will present a retrospective on the Netherlands in the 10th and 11th century in a European context, accompanied by a book for a large audience, a short film about this era and an educational programme that includes intergenerational learning. The exhibition will be designed as an evocative journey through the Netherlands around the year 1000. It finishes at the Palace of Nimwegen, during a visit of the German Emperor Otto II and his Byzantine spouse Theophano.

Aim of the project

The aim of the project is to realise a new and comprehensible image of the period around the year 1000 in the Netherlands, by means of an inventory of archaeological finds, remains of buildings, and objects from the 10th and 11th century, plus a synthesis of research into those, and to communicate this image with a large and varied audience through an exhibition, book, and film.

The 10th and 11th century are an underexposed period of Dutch history, for which archaeology is the main source. In these centuries, the Netherlands become recognizable through large-scale land reclamation and building in stone. Recent excavations have yielded much information on climate change and daily life around the turn of the first millennium. ‘The Netherlands’ do not yet exist at that time, which is why we study the border regions with present-day Belgium (Liège) and Germany (Cologne, Aachen) as well. But the seat of authority was in Paderborn, or even Rome, and there was much travel and trade. Especially in the 11th century, people living in these regions came in contact with a wider world: that century ends with the first crusade to Jerusalem.

For the length of the project, Annemarieke Willemsen has additionally been appointed Museum Fellow of the Royal Netherlands Institute Rome. Part of the research will be conducted there. For instance studying important figures in the exhibition, like Theophano and Sylvester II, Empress and Pope around the year 1000. But pilgrimage from the Netherlands to Rome, apocalyptic thinking, and heresy as well. In October 2021 we organized a workshop on The year 1000 in Rome at the KNIR and on November 8, 2022 a lecture by Veronica West-Harling will be dedicated to this theme.

Raphaël Rijntjes is contacting many archaeology services and archives, museums, and private individuals for the inventory. We would love to hear from people who own or know objects from the time frame 900-1100: send a message. 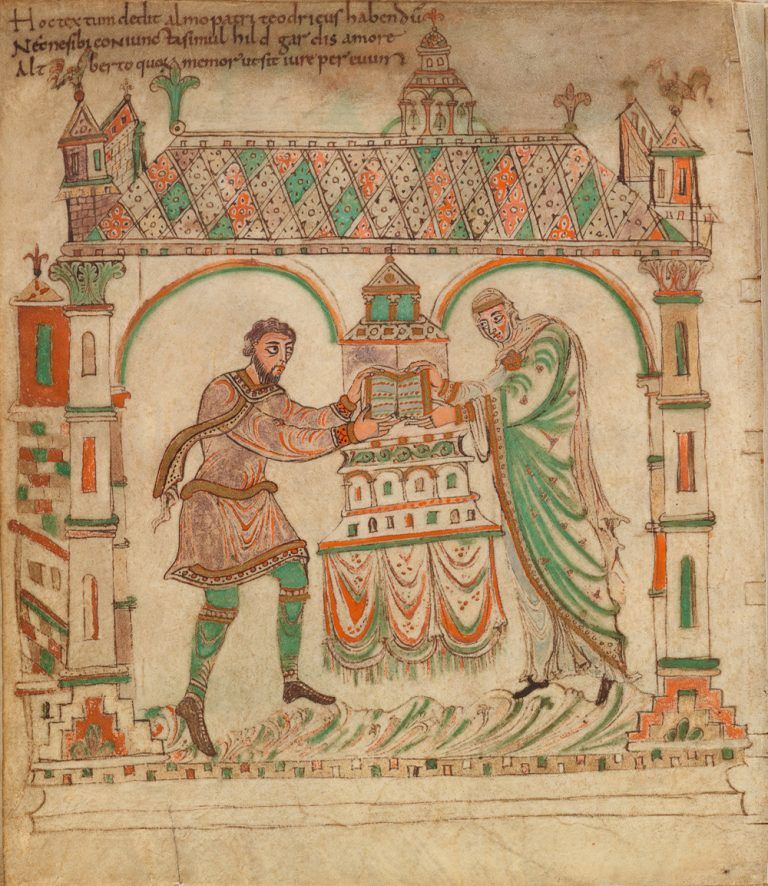 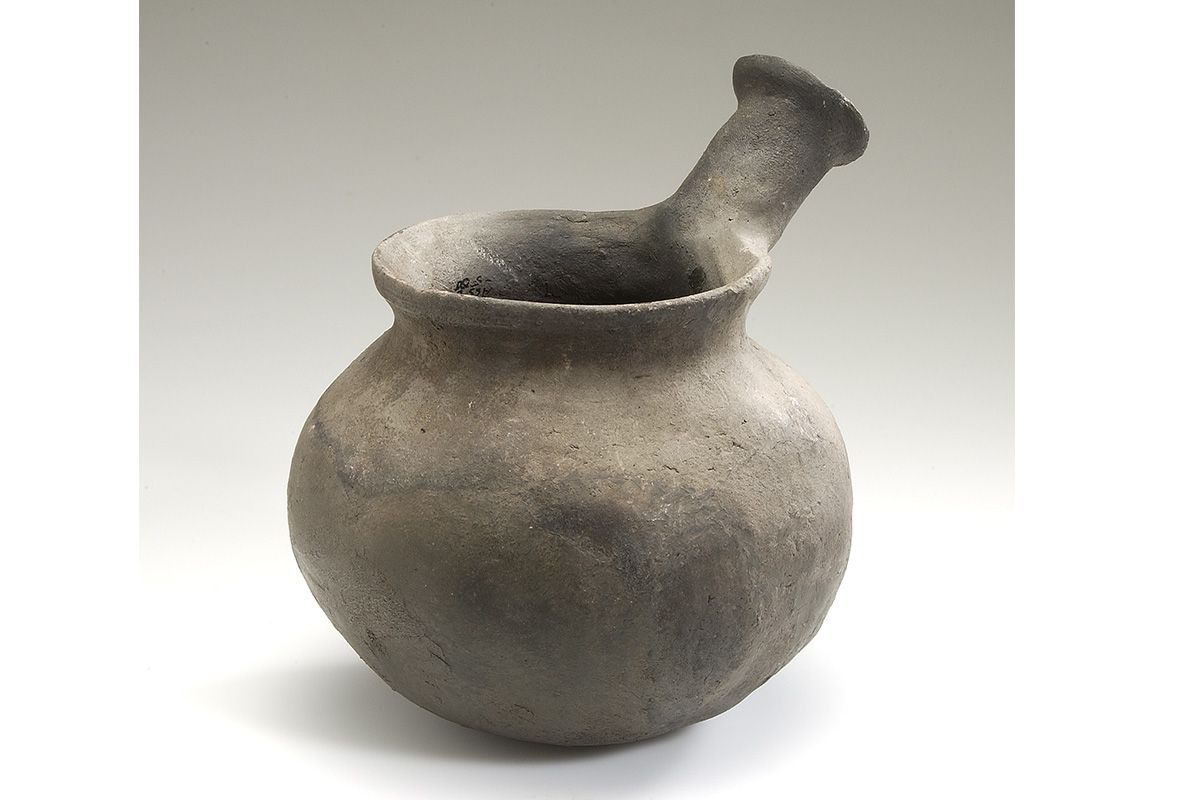 September 2022 – Comprehensive publishing | In the course of the research into the Egmond Gospels in the Royal Library of The Hague (76 F 1), KB-curator Ed van der Vlist and me are now fascinated by the 1812 edition, that his predecessor Hendrik published. It became clear that there are copies of that book and proofs for the plates in the Library, filled with notes and instructions in the for Ed very recognizable ‘unreadable’ handwriting of Van Wijn. While I tried to sequence the proofs to reconstruct the making of the publication, we realised that Van Wijn grew to understand the medieval book during the edition process! For instance, only by the colour proofs, the name of the Count of Holland depicted was corrected from “Florentii” = Floris to “Theodrici”: Dirk II. As far as we know, no-one ever looked at this. Ed will now transcribe the notes – of course he has no time for that, but his hands are itching [AW]. 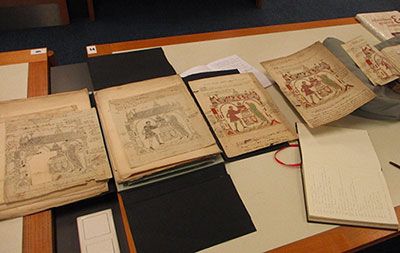 July 2022 – Gold rings | From the International Medieval Congress I visit the Leeds City Art Galleries to see the ‘West Yorkshire Hoard’’ It’s a spectacular detector find with four rings from the 10th/11th century AD. Three are decorated with filigree threads of small gold balls. These rings are the best parallels for at least two gold rings found in the Netherlands, that we want to show in the exhibition. From up close, I have been noticing the ‘bridges’: thin threads to attach the filigree to the surface. I do not know those from Anglo-Saxon filigree work. To my delight, the objects from Yorkshire have them too. Now deciding if we want to try to borrow that one ring (top right) as well… [AW] 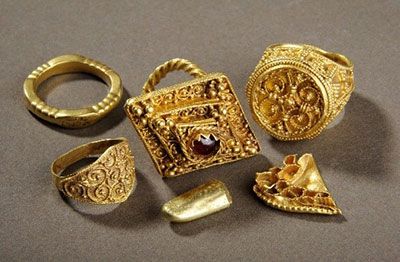 April 2022 – The Golden Rhinoceros | This semester, we are also researching how we want to deal with the global context in our exhibition. The time around the year 1000 is not just an important moment in Dutch or European history, but for the rest of the world as well. In the southern part of Africa it was a period of prosperity and international trade, controlled by the kingdom of Mapungubwe. A lot of objects originating from regions in Asia and Africa have been discovered at the capital of the same name. The wealth that was gained through this trade becomes visible in the large amount of golden objects found on top of the hill, where the kings used to reside. One of the most famous examples is the golden rhinoceros, found in “the golden grave”. A small statue made of gold leaf carefully formed around a wooden rhino. In world history, Mapungubwe does not seem to be an exception, so what else waits to be discovered? [Floor van Doesburg] 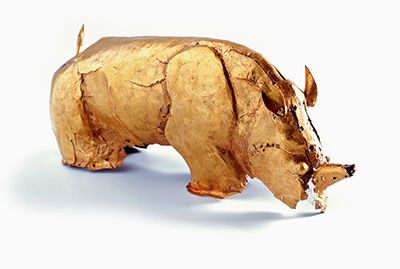 March 2022 – The Apocalypse on a Tapestry | At the Leiden Observatory, we visit a lecture by Michael Lewis (British Museum) on the 11th Century Bayeux Tapestry. Around the year 1000, it was believed that the world would end. This would be heralded by a series of omens in the form of natural phenomena. For example, the English believed that Halley’s Comet, depicted on the Bayeux Tapestry, was an omen for the ensuing invasion by the Normans. Halley’s Comet is a periodic comet. This means that the comet comes back after a certain amount of years. The comet passed by the earth three times in the 10th and 11th centuries and has been observed and documented by people in China, Japan, Germany, England, Switzerland, France, Ireland, Austria, Egypt and Iraq. [Femke Warnar] 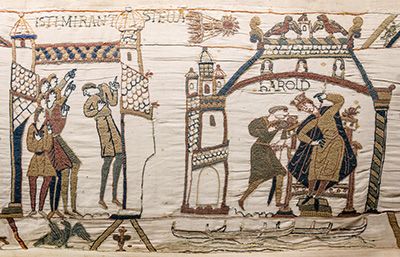 December 2021 – Rediscovery of a capital | At a round table with experts, we show some objects of c.1000 AD from our collections. Millennium find: an Ottonian column with capital that was located by assistant curator (and building historian) Raphaël Rijntjes in storage. Height 37 cm, typical acanthus leaves and volutes, maybe from an altar? It is from Elten, on the border between the Netherlands and Germany, and was once used as threshold of a garden fence. It arrived in the RMO already in 1835, when it was thought to be Roman. But it dates close to 1000 AD and is definitely going into the exhibition. [PL & AW] 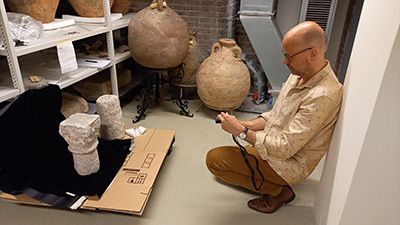 October 2021 – Pilgrim in Rome | In Rome with intern Pleun van Lieshout, who researches pilgrimage to Rome in the 10th and 11th century. Various travelogues have been preserved from this time, even from Icelandic pilgrims who wandered via Utrecht to Rome. These texts give an impression of the long and dangerous journey. Pilgrims made their will before leaving, in case they froze to death in the Alps… Finally in Rome, northerners stayed at the schola frisorum, where the Frisian Church is, close to St Peter’s. In San Clemente, an 11th-century fresco even depicts a pilgrim, recognizable by his staff and shoulder bag: St Alexis on arrival in Rome. [AW & PL] 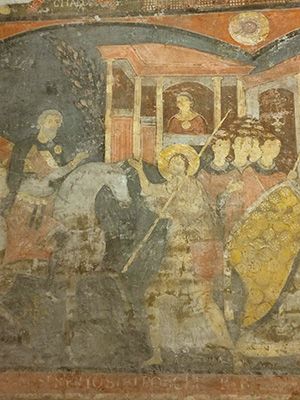 September 2021 – Viking drinking horn | In Limburg to visit treasuries of 10th/11th Century basilicas. In that of the Church of Our Lady in Maastricht, verger Mark Pleunis and I look at the silver plated Viking drinking horn, later used to store relics. It’s a key object for The Year 1000 and already the banner of the project website. Now we deliberated a loan and it looks good! And today I am allowed to just hold it in my hands -adrenaline- and study it up close. New ideas immediately: the silver strips, with animals, masks and plaits, might be based on textiles. Worth thinking about. [AW] 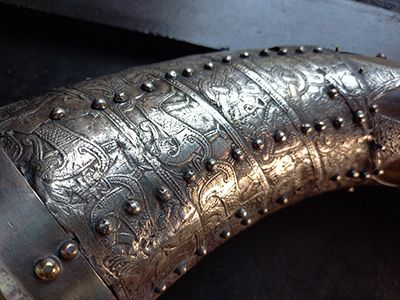 June 2021 – The real book | Libraries reopened! So started researching the Egmond Gospels in the Royal Library The Hague, with curator Ed van der Vlist, conservator Ilse Korthagen and RCE-scientist Luc Megens. This is possibly the most important 10th-century book in the Netherlands. We are planning technical analysis to create an object biography for the exhibition. Step 1 is always: a close look at the original manuscript and formulating questions. Were the famous pages at the end with Dirk II, count of Holland, planned this way? Has some text been erased there? And do we see a master and an assistant at work in the wonderful illuminated pages from around 900 AD, full of interwoven patterns, bird’s beaks, and columns with eyes? [AW] 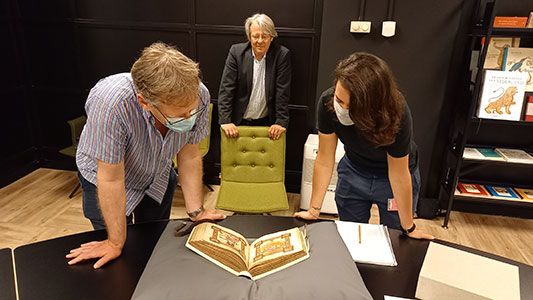 May 2021 – In Rome with Otto | Eye to eye with the Emperor of the year 1000 AD! Otto III is depicted on a wellhead in San Bartolomeo on the island in the Tiber. Wonderful 10thC sculpture, looks like ivory carving, but 75 cms high. And it still functions, above a source with healing water: inside are good deep traces of hauling buckets. On the front Christ is shown, on the left St Bartholomew (with knife), on the right a bishop and on the back the crowned and bearded Emperor Otto. To see him, you woud have to lie down outstretched across the altar steps. That is called proskynesis – and is exactly what common people are supposed to do before an Emperor… [AW] 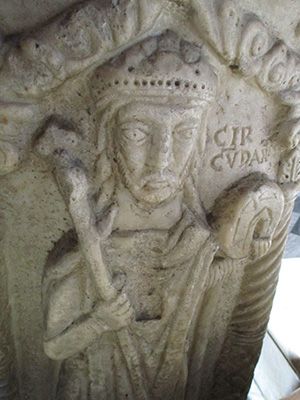 April 2021 – Griffin from Istanbul | Looking through the stores to see what the international RMO collections hold from 900-1100. We seem to have a mosaic from the Hagia Sophia in Istanbul! A nice large piece showing a “flying griffin” with two tulips in the background, that has been in Leiden since 1744. Its provenance was noted down in 1802 as “Constantinopoli e ruderibus S. Sophiae”, the ruins of the episcopal palace surrounding the proper church/mosque. That’s interesting, because it means it stems from an elite residence. Stylistically it fits with North-Italian mosaics from the 10th-11th century. The griffin is welcome in our exhibition. [AW] 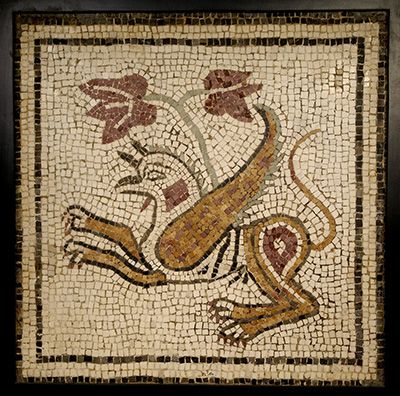 February 2021 – Money and Portrait! | Deliberations with Paul Beliën of De Nederlandsche Bank about coins from the 10th and 11th century that we might show in our exhibition. Mainly it’s silver coinage and very small: coins like thumbnails. So we will have to show these with photographic enlargements, or maybe 3D animations. A nice thing: the coins depict people, like Hendrik II, Emperor Conrad II and Bishop Adelbold. There we were, thinking we had almost no portraits of our key players… Moreover, they are shown in the way they wanted to present themselves, with the attributes of their functions. We can work with that! [AW]