Lara Weiss, Daniel Soliman and their team write a Digging diary every week (see below photos)

In mid-September, a research team from the National Museum of Antiquities arrived in Egypt, towards the village of Sakkara. This is where the excavation site is located, where they conduct six weeks of research into an ancient Egyptian burial field every year. After a two-year absence due to corona measures and the associated travel restrictions, the team will continue this year to excavate a new tomb, the entrance of which was found in 2019.

As then, in addition to the archaeologists, a large team of specialists will go to Egypt, such as the Milanese surveyors, who carry out scans to document the ongoing excavations, a textile restorer from the Museo Egizio and specialists for researching human remains and pottery. Together with the project partners of the Turin Museo Egizio, the team hopes for beautiful and interesting finds.

The team consists of several scientists and is led by Dr. habil. Lara Weiss and Dr. Daniel Soliman (curators of the Egyptian and Nubian collection of the National Museum of Antiquities), together with Dr. Christian Greco, director of the Museo Egizio, Turin. The project is co-funded by the Netherlands Organisation for Scientific Research. 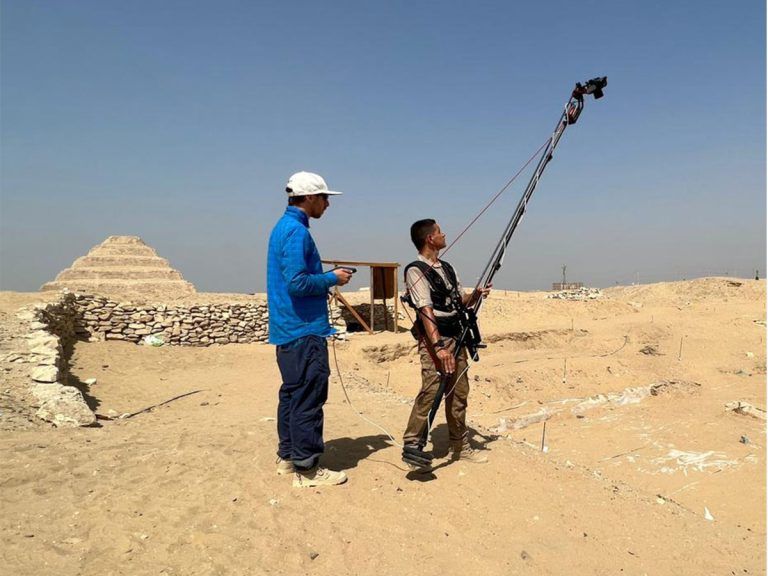 Week 3: Survey of the excavation area 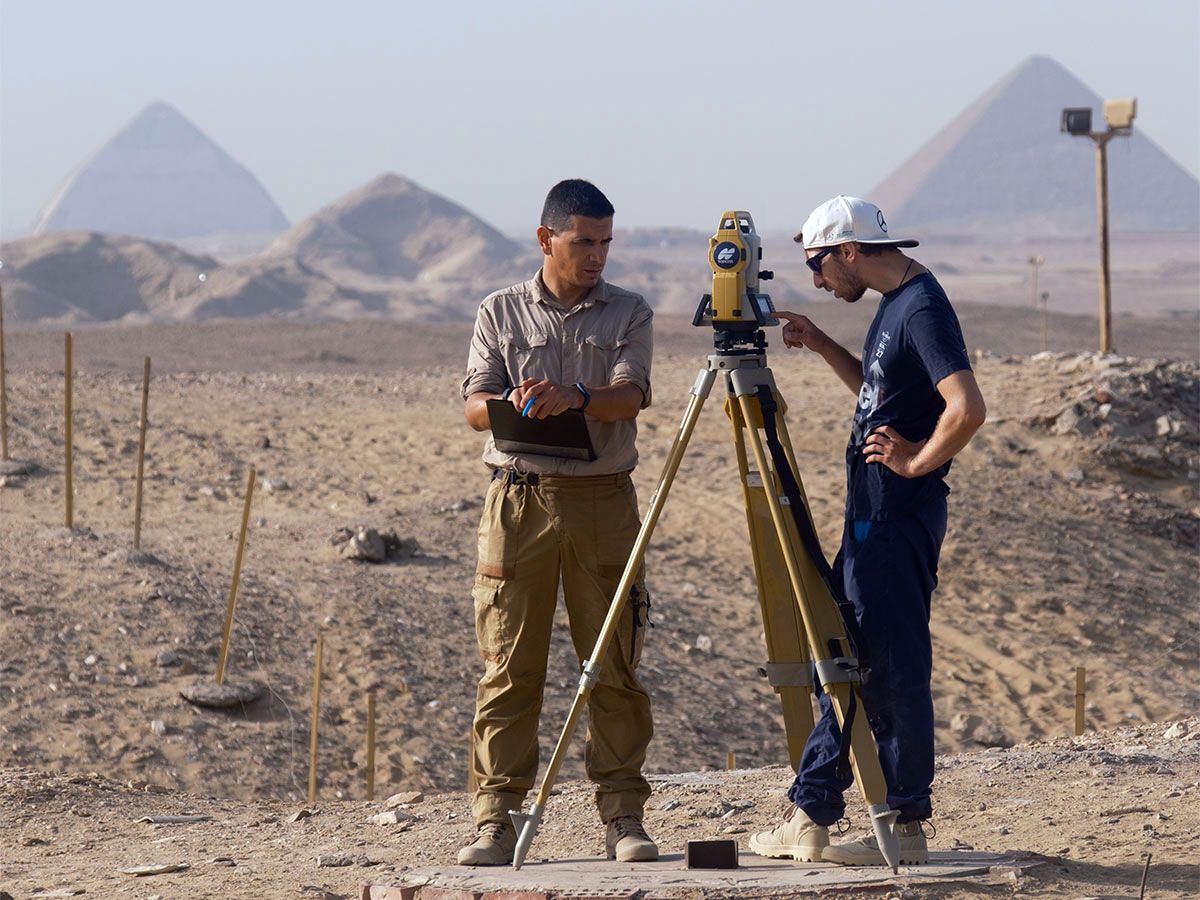 By Lara Weiss and Daniel Soliman

In 2020, 2021, and spring 2022, the Leiden-Turin Excavations at Saqqara were cancelled due to the travel restrictions of the ongoing pandemic. We are therefore very happy to finally be able to continue our work this autumn. The mission will take place from 14 September to 27 October. We plan to finish excavating the small but monumental New Kingdom tomb in the area north of the tomb of Maya first uncovered in 2019, to learn more about its original owner, and of the later burials that might have reused the space. Apart from our usual aims, we have some other exciting projects lined up that will be revealed in upcoming digging diaries.

Departing from Amsterdam, the long wait at Schiphol airport on Tuesday 13 September (almost 4h!) was quite a challenge for us, but eventually we were very happy to leave towards Cairo with only a bit of a delay. Cairo greeted us with a warm breeze of almost 28 degrees at 23 PM, and we were delighted to finally see Moshir Tawfik again, our friendly driver, who has been working for the Netherlands-Flemish Institute in Cairo (NVIC) for decades already. Daniel went on to meet his family, while Lara stayed overnight at the NVIC, together with our Italian colleagues from the Museo Egizio: mission co-director Christian Greco, the mission’s photographer Nicola Dell’Aquila and Valentina Turina, textile conservator from the Museo Egizio who will study our linen finds in detail. The rest of the team will arrive on Friday, and the work shall begin on Sunday, the first day of the Islamic work week, that has Friday off.

Our first goal before excavating was to finalize all administrative matters and open the site, which means unlocking the sealed spaces we left in 2019. It is an official procedure attended by a committee of Saqqara officials of the Ministry of Tourism and Antiquities (MoTA), who together with the mission directors, Christian and Lara, inspect the state of the site. The directors and the committee make plans for the upcoming season, such as hiring the workforce, setting salary rates, and decide if and where restauration is urgent.

On 14 September, in the morning we first delivered a big chunk of Dutch cheese to NVIC’s director, Rudolf de Jong, we greeted everybody in the institute, and then moved on to Giza, where we signed our contract in the MoTA office for foreign missions. Secretary-general of the Supreme Council of Antiquities of Egypt, Dr Mostafa Waziri, and the permanent committee kindly approved all our plans for this season, except for the study of the underground chambers of the 2nd Dynasty tomb underneath the tomb of Meryneith, which will be postponed until another time.

From Giza, we drove to Saqqara to see the (General) Directors of Saqqara, Dr Mohammed Yousef and Dr Sabry Farag, as well as many other Egyptian colleagues and old friends such as Salah el-Deen Hasabalaa. He helps us with the day-to-day business like the acquisition of our workforce, grocery shopping, and is also in charge or our equipment storerooms. Of course, many thing such as books, lamps, and tables cannot travel back and forth every year, and it’s great to store them away in Egypt. We also saw our usual rais (the, overseer of workmen) Mohamed Fawzy, and several other Saqqara friends such as Assam Rashed and Mohamed Ibrahim, and last but not least our housekeeper and chef of the Saqqara dighouse, Atef Sayed Ramadan, who served us a nice lunch after we had settled in and unpacked.

The next morning, on 15 September, we went up to the site around 8 AM to be reunited with the excavation area that we had to miss for so long. We were very glad that to see the tombs and a good state. Yet, it is clear that climate change is also affecting Egypt, and three seasons of heavy rainfall have caused some of our modern tomb wall restorations to begin erode. Officials from the MoTA opened the storerooms, and now the site is ready for the mission’s work. Afterwards, we visited Dr Mohammed Yousef and Dr Sabry Farag at their ongoing excavation of the Bubasteion cemetery, well-known from the recent Netflix documentary. After a very pleasant chat, we went to our dighouse to enjoy our lunch. Tomorrow, the mission’s director Lara and Christian will leave Egypt to attend to other obligations, but our colleagues Ali, Alessandro, Barbara, Lyla and Simone will arrive soon to join the team. Then, finally, on Sunday we will begin working on the site.

And of course, we will keep you updated about our findings and activities. Stay tuned!

After opening the site, here we finally are to get going! I am Valentina Turina, a textile restorer, and this week I was finally able to study the textiles that have been discovered during past excavation seasons.

In the campaigns of the past years, in fact, a lot of textile fragments of different sizes were collected. They are linen, the most common fabric in Ancient Egypt. In addition to linen fragments, there are also Coptic fragments characterised by colourful woollen weaves that create beautiful decorative elements. Hundreds of linen fragments are waiting to be looked at! This week, my goal was to view all the linen textiles found in the 2019 season and decide how to store and conserve it.

I started by selecting the most noteworthy textiles and taking overview photos of them. This sounds like an easy job, but on the site there are many challenges, primarily the wind. The textiles are very light and are at danger of being moved during windy desert days. So, I armed myself with patience and entomological pins and fixed the small fragments on a piece of acid free cardboard so that I could photograph them properly. With the invaluable help of our photographer, Nicola dell’Aquila, I succeeded in this task.

This first phase of work was full of surprises: there were pieces with small fringes, tunic elements, and textiles with several types of stitching. Among the latter, I was immediately captivated by a triangular-shaped fragment that, after studying its shape and edges, turned out to be a fragmentary loincloth. Among the many linen fabrics, I also found some bone elements, promptly photographed and catalogued by our team member Ali Jelene, who studies the human remains for the excavation.

A second particularly important aspect of my work is the preservation of the textiles. Indeed, it is important that the textiles be properly preserved, as much as possible sheltered from external conditions. I spent the last days of this week taking care of conservation procedures that are essential for the preservation of the finds, such as dusting, smoothing out creases, and finally, store them inside micro-perforated bags, suited for storing the finds on the site.

I end this week at the excavation by reflecting on how to continue the study of these textiles and what improvements to make to the artifact storage system.

Let me introduce myself: I am Simone Galli and on September the 16th, on my 30th birthday, I received as a present the opportunity to join the joint Leiden-Turin mission for the first time. In this excavation season, I am supporting the topographic and photogrammetric survey activities, aimed at studying and documenting the archaeological contexts.

Currently, I am a PhD student at the Department of Architecture, Built Environment and Construction Engineering (ABC) of the Politecnico di Milano and I deal with archaeometry, more precisely non-destructive testing. In particular, I study computed tomography – an imaging technique that uses penetrating electromagnetic waves to “look” inside objects – and its applications in the field of Egyptology. In this adventure I am supported by my colleague (and, let me say, my mentor) Alessandro Mandelli, a specialized technician from the ABC Department, in his third season here in Saqqara.

Alessandro and I represent, in this context, “the operational arm” of the EIDOLON Experimental Unit belonging to the ABCLab Laboratory System. The scientific coordination of the EIDOLON Unit is entrusted to Dr Corinna Rossi, associate professor of Egyptology at Politecnico di Milano. The aim of the Unit’s research is to identify the most efficient and effective criteria and processes to document and investigate archaeological finds and to communicate the results.

We provide the archaeological team with constant metric information during the progress of the excavation. This information is obtained by both topographic and photogrammetric means. The latter technique allows for the rapid acquisition of photographic data that are subsequently processed to produce high-precision three-dimensional models. This allows us to investigate over time what no longer exists, since archaeological excavation is by its very nature destructive.

Every morning, the mission members head to the site at 6:30 a.m.; some by car, some by foot. I prefer to walk because this way I can admire very closely the impressive Step Pyramid of Djoser. In the morning, my first activity is setting up the coordinate system for the correct positioning of archaeological finds. This first operation is carried out by means of a surveying instrument called Total Station.

We spent the first week of work to double check the excavation’s grid system. All excavation activities take place in a very organised manner within a point grid with a 5-meter interval. This makes it easier to precisely locate the position of the finds.

During my second week, after the arrival of other team members, we moved on to the three-dimensional documentation of the finds and the site. Some of this work is quite predictable, like surveying the surroundings, but other aspects are dictated by the finds of the moment, like the discovery of structures.

Every Monday and Thursday, at 1 p.m., that is, at the end of the working day at the site, we document the progress of the entire excavation area. We photograph the entire excavation site and process it, using specific software, to create both a three-dimensional model and orthophotos. Because this is done throughout the excavation, it will allow the archaeologists to “go back in time” if needed and view the site at earlier points in the excavation.

I end the week with the sad awareness that this is my second and last week. As you are reading this, I am on my way to Milan and my colleague Andrea Pasqui is going to take my place. He is a Ph.D. student at the ABC Department of Politecnico di Milano like me and is studying the dissemination of archaeological sites through photographic imaging techniques. Together with Alessandro, he will continue the measurement activities to support the excavation for the rest of the season. 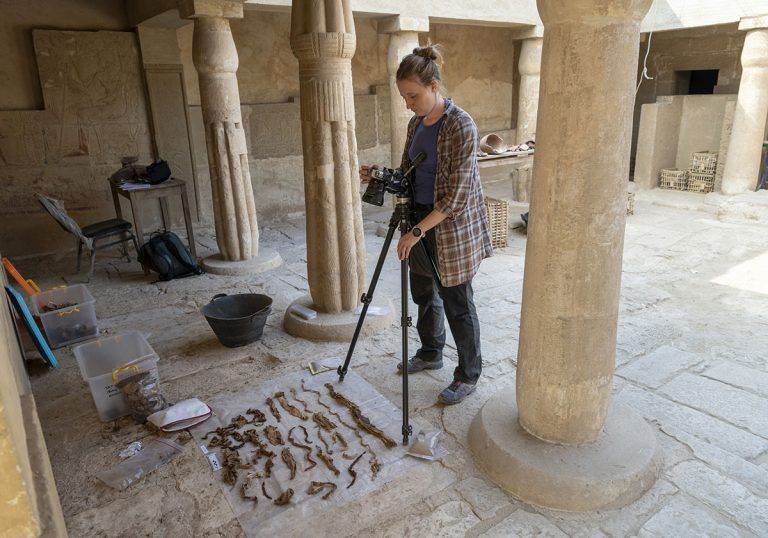 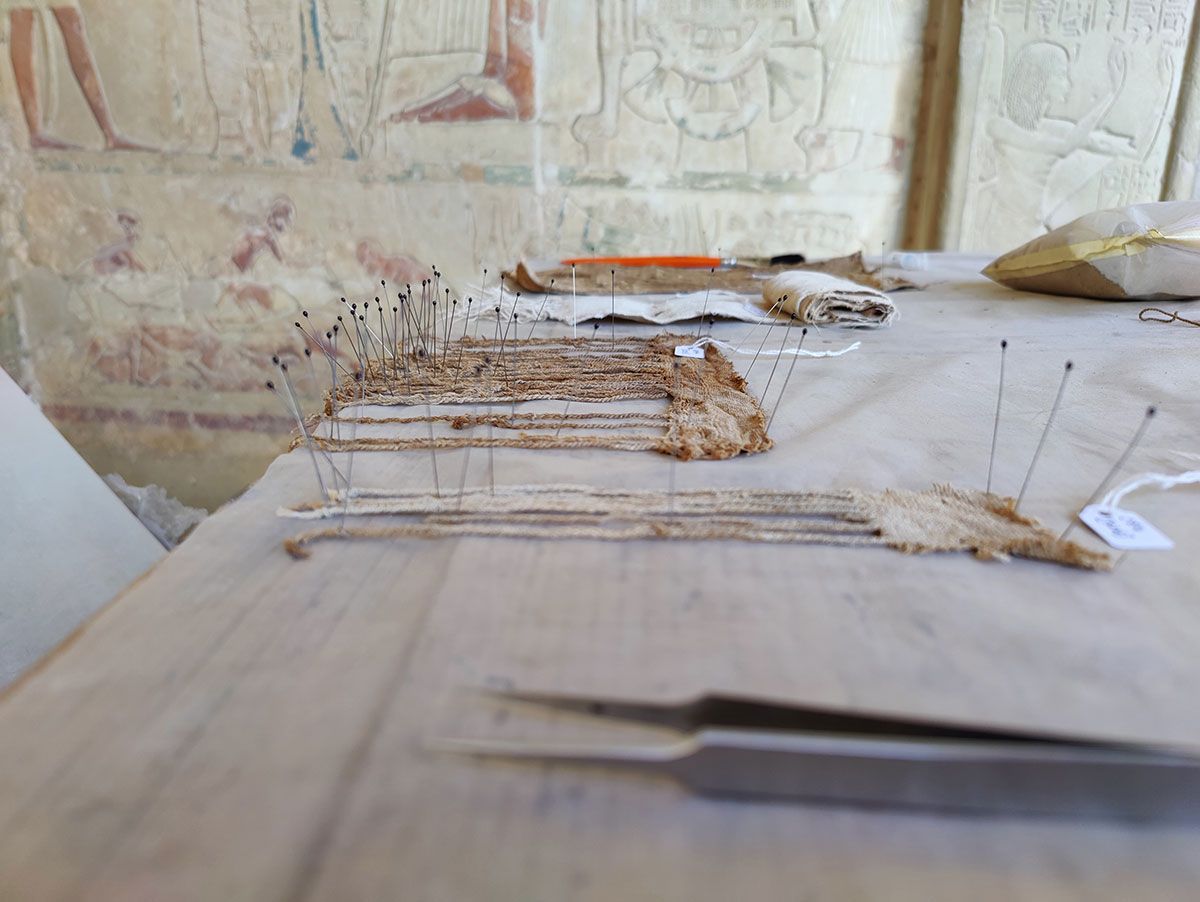 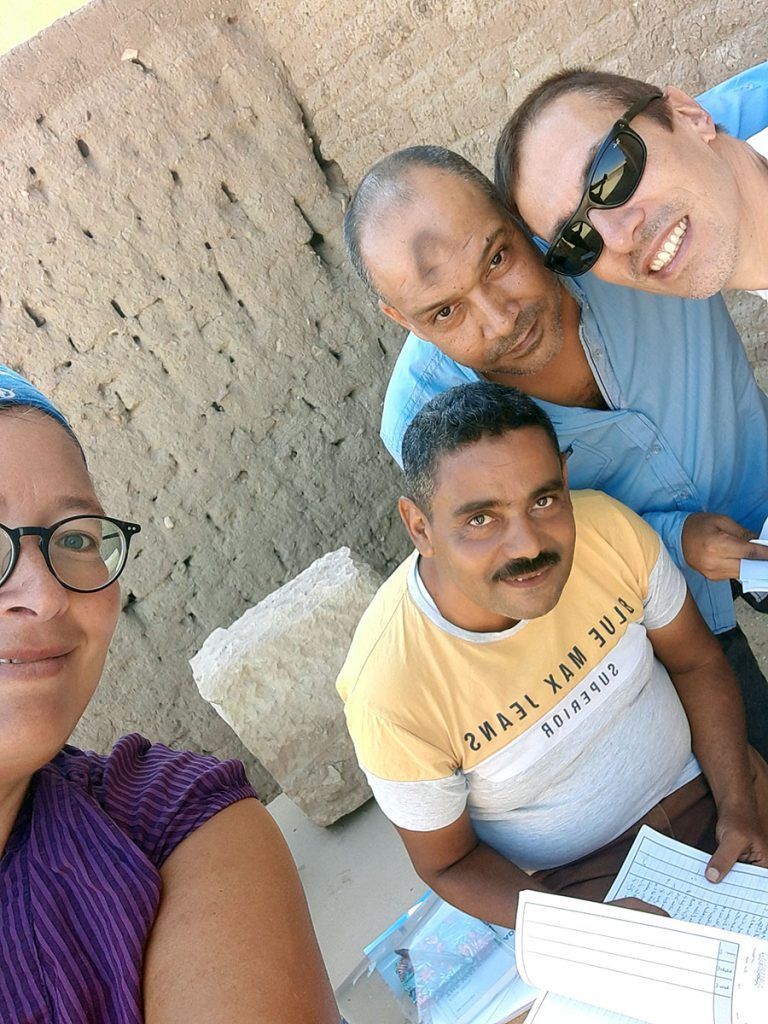 Week 1: Signing the book to open the site 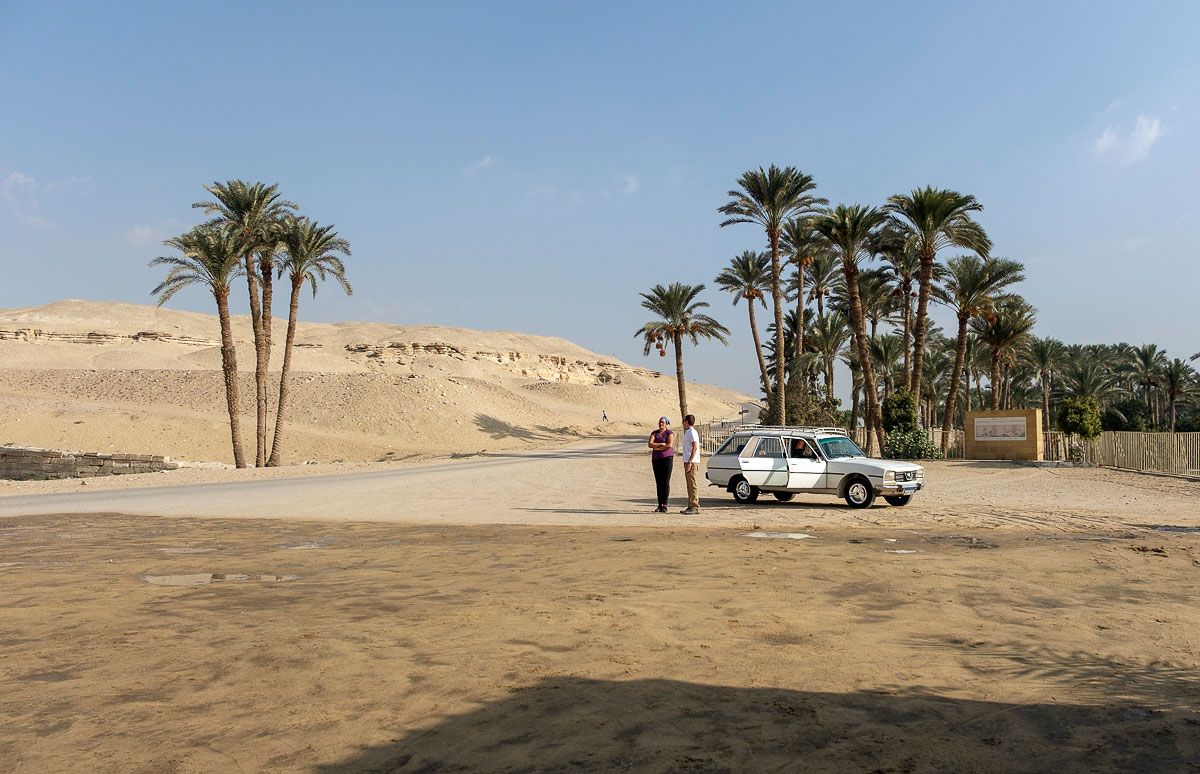 Week 1: Christian and Lara in Saqqara 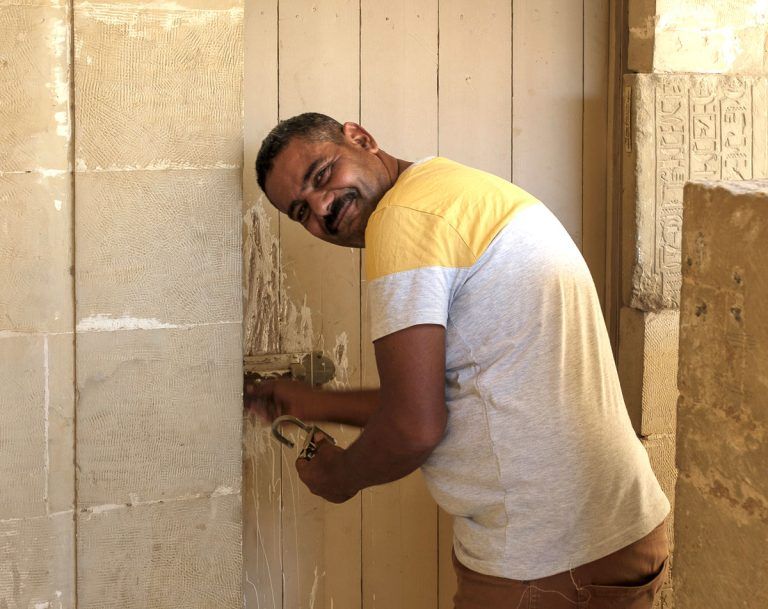 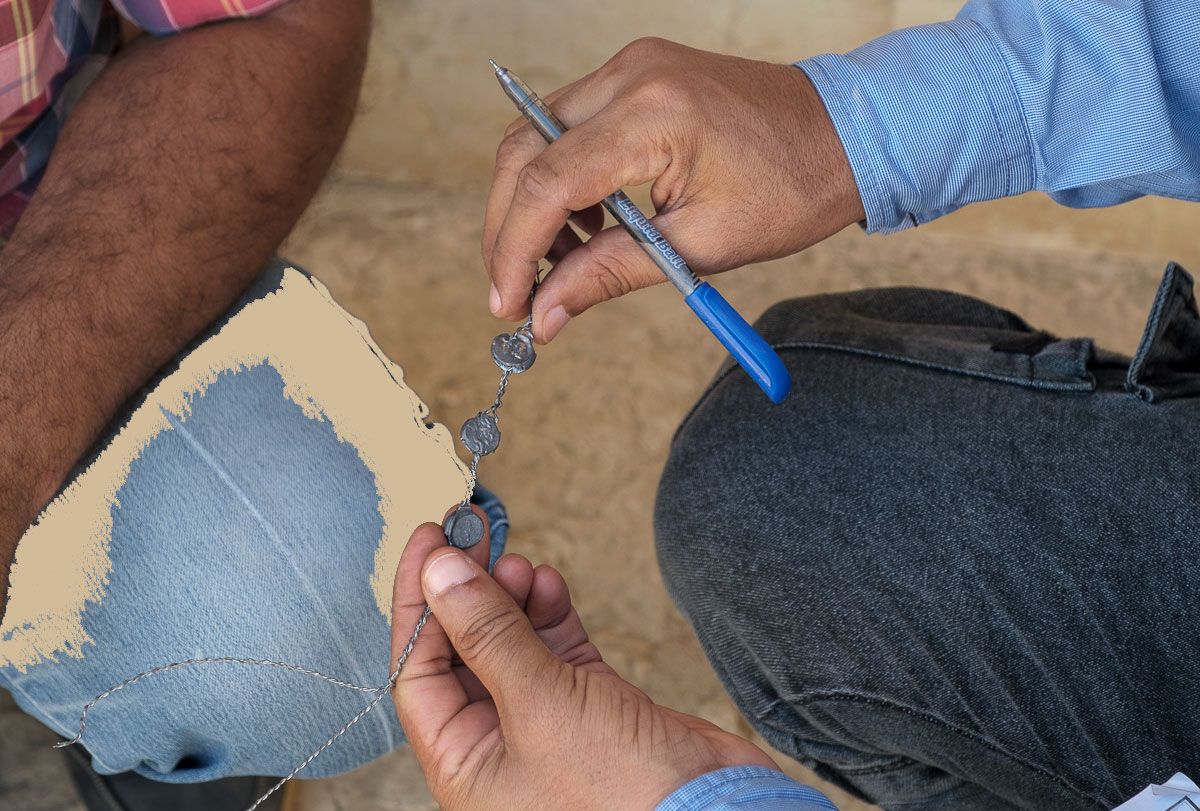