Research in the burial grounds of Saqqara since 1975

The National Museum of Antiquities has been working on an excavation project in Saqqara since 1975, carrying out research and excavations for a few weeks each year. The current field directors of the research project are Dr. habil. Lara Weiss, curator of the museum’s Egyptian and Nubian collection, and Dr Christian Greco, director of the Museo Egizio, Turin.

In 2022, the archaeological investigation will take place from 14 September to 27 October.

You can also follow the progress being made in the Saqqara dig on the website of the excavation. You can support this project by joining the Friends of Saqqara.

The researchers set to work every year – nowadays usually in March and/or April. The international team consists of scientific experts and staff attached to the two museums. Equally important is the group of Egyptians who do the hard work of digging. The team registers all finds, traces, and other on-site discoveries. They study and analyse the results at length afterwards, eventually publishing their reports in scientific journals.

The archaeological research project in Saqqara was launched in 1975. Up until 1998, the museum cooperated with the Egypt Exploration Society in London. The University of Leiden became involved in the project in 1999, followed by the Museo Archeologico in Bologna in 2011. In 2015 the Museo Egizio of Turin joined in as the third partner. The current supervisors of the research project are Dr Lara Weiss, curator of the museum’s Egyptian collection, and Dr Christian Greco, director of the museum in Turin.

The object is to learn more about the background and history of the museum’s collection. To achieve this, the excavation team works in the immediate vicinity of sites where museum objects were found in the nineteenth century. Many of these objects, such as reliefs and stelae, have become dispersed over the years among museums all over the world, including the National Museum of Antiquities. The excavations have taught the researchers more about the tombs in which these objects were found so long ago. For instance, thanks to the research in Saqqara, they now know more about the places and functions of the objects in the monumental tombs. In addition, tombs once believed to have been lost have been rediscovered. New finds are kept in Egypt. Examples include the double statue of the high priest Meryneith and his wife Anoey, which was excavated in 2001 and is now displayed in the Egyptian museum in Cairo.

Saqqara is about thirty kilometres south of Cairo. From Saqqara you can see the famous step pyramid built by pharaoh Djoser (c. 2650 BC) on the horizon. For thousands of years, the desert near the village was used as a burial ground for the high-ranking officials of Ancient Egypt. Egypt’s Ministry of Culture gave the museum permission to conduct research in part of the burial ground – a section dating from the reign of the pharaohs Tutankhamun, Ay, Horemheb, and Ramesses I and II (1334–1212 BC). The grounds were also used for burials in later periods of Egyptian history.

Most of the graves found in Saqqara consist of a small temple, with a burial vault or a complex of different burial chambers underneath it. The walls of the temples are decorated with sculpted reliefs and colourful wall paintings. The underlying burial chambers can be reached through deep shafts.

The project is funded by the National Museum of Antiquities, the University of Leiden, the Museo Egizio, the travel agency Labrys Reizen, the Netherlands Organisation for Scientific Research (NWO), the Friends of Saqqara Foundation and a number of private individuals. The Friends of Saqqara Foundation provides financial support to the ongoing excavation project. Donors to this foundation can attend the annual Saqqara day (in June) free of charge, besides which they and receive the printed Saqqara Newsletter, which is sent out in autumn each year. 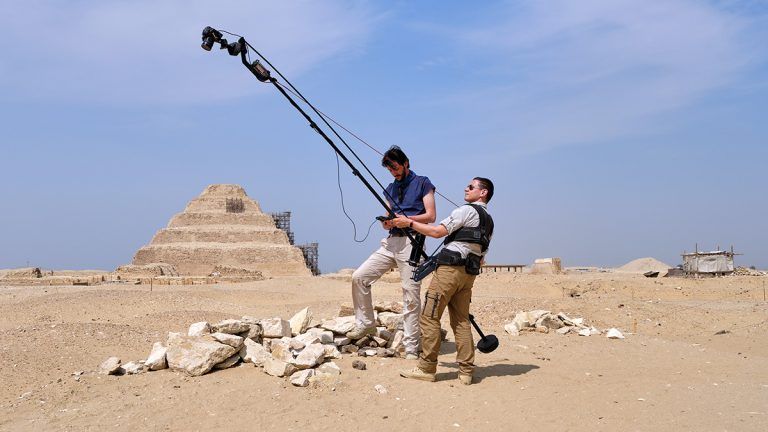 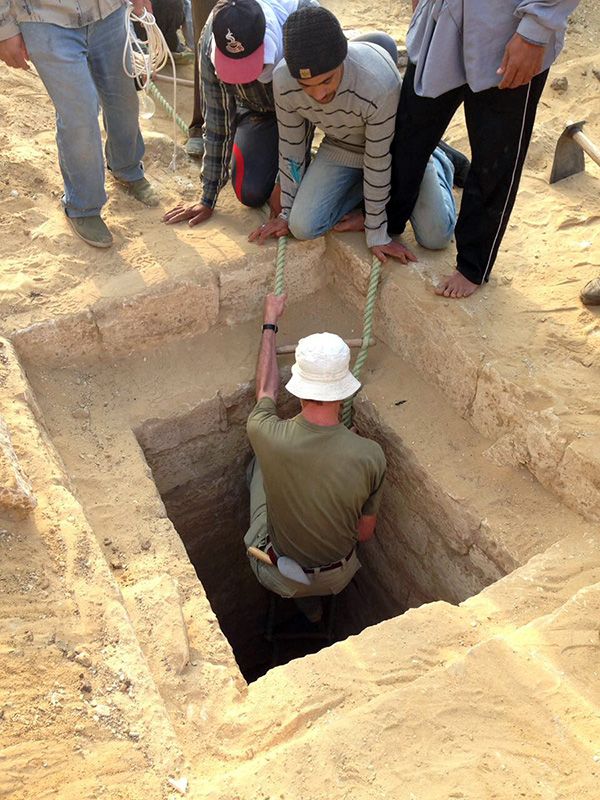 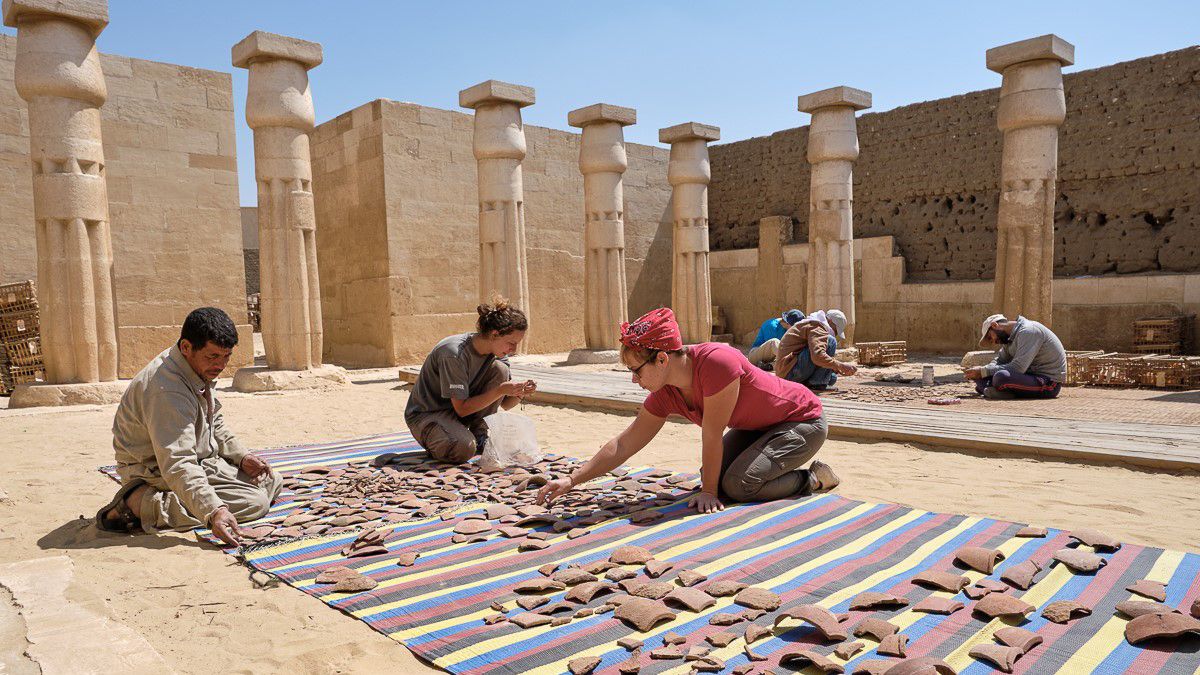 Horemheb was a general under Pharaoh Tutankhamun. He himself became pharaoh in 1319 BC, and he was therefore buried in the Valley of the Kings, near Thebes. The tomb that had previously been prepared for him in Saqqara was later used for his second wife, Queen Mutnodjmet.

Paser was an architect and Raia was the chief singer in the temple of Ptah during the reign of Pharaoh Ramesses II.

Tia was the elder sister of Pharaoh Ramesses II. Her husband was also called Tia. He was Ramesses II’s treasurer.

Iurudef was the private secretary of Tia and Tia. In later times (11th –10th century BC), his burial chambers were used as a mass grave. About 70 mummies and mummy cases from that period have been found there.

Ramose was an army officer. Beside his tomb were found those of Khay and Pabes. Khay was a gold washer and his son Pabes was a merchant.

Maya was Pharaoh Tutankhamun’s treasurer and Merit was his wife. Since the nineteenth century, the museum has possessed three very fine statues found in this tomb, which was rediscovered by the archaeological team by following a robber’s tunnel that led to it from the tomb of Ramose.

Iniuia was the Overseer of Cattle in the reign of Tutankhamun. He worked under Maya’s supervision.

Pay was the director of the harem in the reign of pharaoh Tutankhamun. His son Raia succeeded him in this position after a military career. Raia also chose to be buried alongside his father.

An area measuring 25 x 12 metres to the south of Horemheb’s tomb has also been excavated and examined. The most important find, in 1999, was that of an anonymous mummy case containing a mummy.

Meryneith served as steward and sun priest during the reigns of the pharaohs Akhenaton and Tutankhamun (1353–1323 BC). Anuy was his wife. Colourful painted reliefs and a rare double sculpture of the couple were found in the tomb complex. In 2002, the research team discovered the remains of a royal tomb dating from c. 2700 BC beneath this complex.

During the excavations of the area around the tomb of Meryneith, it was discovered that the tombs of both Horemheb (see 1975–1980) and Tia (see 1982–1984) had paved courtyards in front of their tombs, which had been overlooked during previous excavations. Horemheb even had a second limestone pylon. A major ‘dumping ground’ used by grave robbers was found in his courtyard, containing items from Tia’s tomb.

Ptahemwia was the royal cupbearer during the reign of Pharaoh Akhenaton – yet another tomb from the days of this ‘heretic king’! The tomb consists of columns and three chapels. Remains of reliefs depict the deceased inspecting a property and others making offerings to the deceased and his wife Maia. The tomb remained unfinished during Tutankhamun’s reign.

Both Chay and Tatia were connected with the god of the city of Memphis, Ptah, where they served as priests. During processions they supported the front of the deity’s litter. Chay has a small clay chapel to the south of Horemheb’s tomb; Tatia has a limestone chapel beside the tomb of Meryneith. A large gravestone pillar, which has been preserved virtually intact, stood against the back wall.

2011 No excavation work because of political unrest

Because of the political turmoil in Egypt in 2011, the archaeological team of the National Museum of Antiquities decided not to go to Saqqara that year.

2012 Inspection of storerooms and historic structures

A small team went to Saqqara to inspect the historic structures and storerooms. They also tidied up the site and performed restoration work where necessary.

In 2013 a new tomb was discovered, dating from the reign of Pharaoh Tutankhamun or shortly afterwards. The underground chambers of a tomb discovered in 2010 were also examined, and the expedition succeeded in identifying one of those who lay buried there. In 2015 the underground burial chambers were further excavated and studied.

2014 and 2016 No excavation work because of political unrest

Because of the political turmoil in Egypt, the archaeological team of the National Museum of Antiquities decided not to go to Saqqara in these years.

In 2017 the team continued the excavations of the underground burial chambers that had been discovered some years ago and conducted research on them.

Maarten Raven is finalizing his publications of the tombs of Ptahemwia, Sethnakht, and the tomb of Ry, which shall soon appear in the PALMA Series of the Rijksmuseum van Oudheden. The Leiden-Turin mission continued the work in the new area north of Maya and found e.g. a Late-Antique occupation layer, a third Ramesside chapel, and the entrance to possibly a new monumental tomb. The excavations are now also co-funded by the Netherlands Organisation for Scientific Research (NWO) as part of the Vidi-project The Walking Dead at Saqqara.