The Beginning of the Viking Age in the West

Prof. dr. Dagfinn Skre is Professor of Iron Age and Viking Age Archeology at the Museum of Cultural History of the University of Oslo. He will give the keynote lecture of the third episode of the Dorestad congress, which will be held from 12 to 15 June 2019 in the Dutch National Museum of Antiquities. His lecture is about the beginning of the Viking age in the West.

You do not need to register in advance. The main language this evening is English.

The Beginning of the Viking Age in the West

During the Viking Age, Arctic Scandinavia was a source of exquisite furs, down, walrus ivory, and other commodities that met with high demand in England and on the Continent. Hitherto, the earliest firm evidence of this trade has been Ohthere’s account c. 890, but in light of this paper’s findings, its history may be pushed further back in time. Geological analyses of whetstones retrieved in eighth- to early ninth-century Ribe, south-western Jylland, in present-day western Denmark, demonstrate that the majority were quarried near the aristocratic manor Lade (‘loading/storing place’) in Trøndelag, present-day central Norway, some 1100 km by sea to the north.

Because of their high numbers and durability, whetstones retrieved in Ribe and other urban sites may be regarded as a proxy for long-distance seaborne trade from the Arctic to the southern North Sea/English Channel zone, where Dorestad was the main port for northbound trade towards Kaupang and other west-Scandinavian sites. The peak in this trade on the threshold of the Viking Age invites a reconsideration of the coinciding and conflicting interests of Scandinavian long-distance traders, kings, and Vikings. It is argued that coalitions and conflicts that arose from these interests provide keys to understanding why and where Vikings raided overseas up to the mid-ninth century. 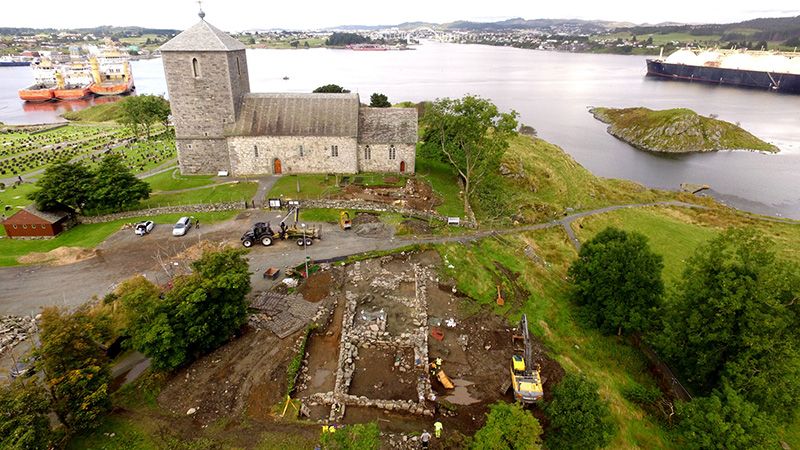 The Royal manor project in Avaldsnes (Norway), where Dagfinn Skre and his team dug up a 'royal residence' from the Viking age.